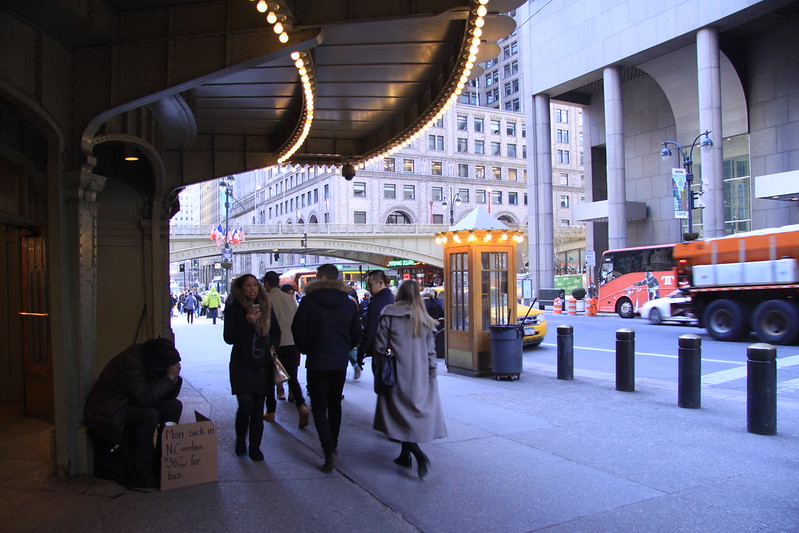 Most of us commute our way to school or work and we are so caught up in our daily routine that we fail to see the reality behind our society.

Starting with a trip on train or a bus ride you can begin to see slight differences in the people that get on. The more you advance on the ride the more people get on, and before you know it there is a mix of different cultures and perspectives surrounding you.

Everyday there is something new to see, as I make my way to work in Midtown Manhattan. Depending on the subway line I take, I get to see many differences; especially when I my stop in the 7 train is on 42st- Grand Central. There are high contrasts in Grand Central Station, in one side there is people nicely dressed, and then there are others who are sitting on a corner begging for food or money. You can ask yourself, how can there be such a great gap between these groups in our so called city and the answer could be because we separate ourselves from the poor, we criticize them and we try to justify their conditions based on our own circumstances, therefore we create a distance between each other and make poverty more “acceptable.” We might not know it, but most of us are seeing poverty as “Pathology,” and the individual him/herself is to blame. It is easier to say “he is poor because he is lazy,” than to say they have fallen under an unjust structure of politics, that seems unescapable if you are born into it.

The most interesting place to see how society unravels has to be Manhattan, because the contrast between wealthy, middle-working class and the poor is so prominent.

At night after work, I walked around 5th avenue, from 45th street to 32nd, (which is something I do every week) and around 8pm most of, well dressed, “pretty” people that make the city luxurious and appealing are not there anymore, and we get a better landscape with more definite colors and sharpness. Most wealthy people who live in the city make their ways back home, you can see it when they are on the LIRR in their laptops or phones discussing events and meetings about their jobs, you can also seem them in the Metro- North doing the same thing. Although the less fortunate are seen setting up their bed in the subway or on the street.

The homeless are many, and we fail to see how many they actually are because in the daytime there is others blocking our view, and sometimes even we decide to look away. Like I mentioned before, it is much easier to play the blame game than to recognize a flawed system which seems to make the rich, richer and the poor, poorer.