For this assignment, I chose to walk around my local neighborhood from 63rd Dr. to Junction Blvd. The majority of people living in this area are immigrants and belong to various ethnic groups. Walking down 62nd Road there are various businesses lined up next to each other such as furniture stores, pharmacies, fast-food chains, and doctor offices. Although the term “affluence” refers to the portion of society that is wealthy, I’d consider the middle class in my neighborhood as affluent. They have access to the resources they need to fulfill their basic needs, but also space in their lives for certain luxuries. It is hard to find an individual in this neighborhood who is truly wealthy.

One factor that contributes to poverty and affluence is housing. On the block following the businesses are apartment buildings where the average monthly rent is $2100. Walking further down is an intersection where several poor people are located. Situated under a highway, there is garbage all over the floor and a horrible stench in the air from the bird feces and dead birds all over the floor. One of the individuals managed to scavenge a few things from the garbage and build what they call a home consisting of a ripped sofa, bed sheets and buckets.

Walking further down is the Queens Center Mall on Woodhaven Blvd. which is surrounded with numerous restaurants and is primarily a commercial area. There are long lines of people waiting for buses in front of the mall along with more poor people with signs asking for help. Moving onto Junction Blvd., this neighborhood is comprised of African Americans and Hispanic individuals. There are several health offices, but just as I passed the area that they encompass, I smelled marijuana and garbage leftover from the night before. The buildings are covered in graffiti and there were drug dealers standing outside of candy stores. There are numerous fast-food chains and discount stores which may imply a form of convenience for those who can’t afford much.

It is evident from what I observed that there exists a pattern in the placement of the poor and affluent in which one group begins where another ends. In the past year, parts of Rego Park have experienced a revitalization and are becoming more commercialized. However, in the process, numerous individuals living in the street are forced to make changes to their lifestyles as they are the primary victims to this change. In the area occupied by the poor prior to the mall, construction was recently done to create two left lanes and more traffic signals. This in turn ate away at the space occupied by the individuals already there and made them move to an even dirtier portion of an already limited space. 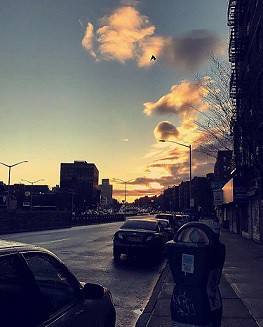