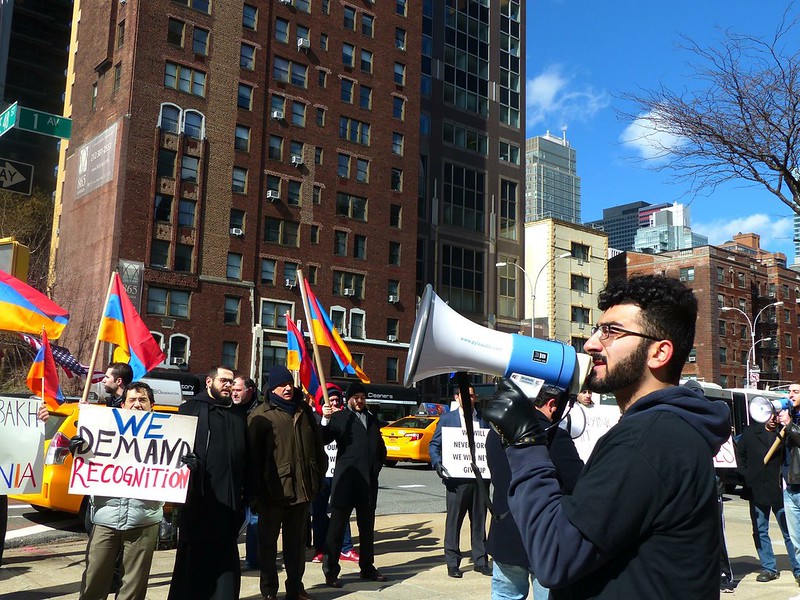 Above: Photo of myself leading the demonstration last year.

The main goal of this social movement is to bring awareness and voice against Azerbaijan’s ongoing anti-Armenian attacks and demand justice for the victims of Sumgait and Baku massacres as well as over 400,000 Armenian refugees expelled from Azerbaijan. The movement is led by the Armenian National Committee of America or the ANCA. The form of protest is and always will be a peaceful protest.

This social movement came about when on “February 27, 1988, mobs made up of ethnic Azerbaijanis formed into groups and attacked and killed Armenians on the streets and in their apartments. Also widespread looting and a lack of concern from police officers allowed the situation to continue for three days. The Armenian civilian residents of Sumgait, including women and children, were slaughtered with savage like brutality. With conflicting numbers some claim to around 30 Armenian deaths, while other claim in excess of 200.”(US) The Azeri’s raped a murdered many innocent Armenians during these terrible 3 days until finally on March 1st the soviets sent in their soldiers to stop the madness.

Just under 2 years later another pogrom in Baku against the Armenian civilians was set out. On January 12, 1990 a 7 day pogrom began. Except, “According to Human Rights Watch reporter Robert Kushen, ‘the action was not entirely (or perhaps not at all) spontaneous, as the attackers had lists of Armenians and their addresses.” (Ghazinyan)This pogrom left an estimate of over 300 dead. Baku was home to over 250,000 Armenians. After the 7 day pogrom there were none left. Refugees fled to Armenia, Georgia, and Russia.

These two of many horrifying acts by Azerbaijan has lit a fire under the Armenians of the diaspora and all around the world. Every year during the last week of February Armenians all over the world do peaceful protests to shed light on these terribly overlooked parts of history. This is tough especially as the Armenian Genocide, which was when the Ottoman Turks killed 1.5 million Armenians because they were Christian has yet to be accepted by superpower nations as the US. In New York the Armenian community goes across the street from the Azerbaijani mission to the UN and does a demonstration. All throughout the community people come with Armenian flags, pictures of loved ones, and posters. The organizers come with microphones in which they have sets of chants to scream out. We remember Baku! We remember Sumgait! Don’t believe Azeri lies! Those are some chants that you would hear if you were to attend a protest.

The movement is not one were it has a goal that needs to be reached and then the protests are over. No. That’s not how it works with protests like these. When you try to wipe out an ethnic nation of people as the Ottoman Turks tried; and also how the Azeri’s tried ethnic cleansing. The protests’ for this magnitude of moral and ethical wrongdoings goes to the point where even if an ultimate goal is reached the people will still come out to remember those who were lost. Those who’s lives potentials were not seen through.

I absolutely believe these protests are effective. Partly because I myself do participate in these protests with all issues that have to do with Armenians. As I am the president of the Armenian Youth Federation in NY I must be involved. Any movement can be effective if you grab the people’s attention and make the subject of your protest important to them. The world may not look all that different without this particular social movement because of how unknown it sadly is. But you never really know the effects of something. I think the most important thing protests/demonstrations/ and socials movements have is the way the educate people about things they might’ve not known about. For the future who knows maybe this could prevent future acts of terror like those committed against the Armenians.