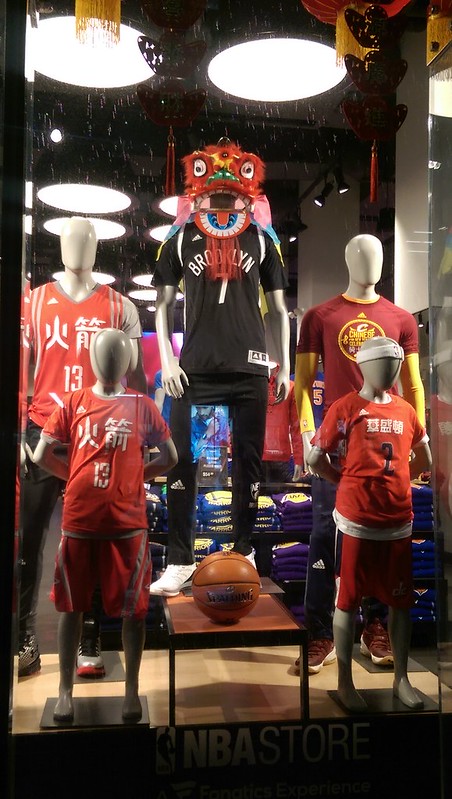 Picture was taken by me at 5th AVE NBA Store for Celebrations of Chinese New Year (PS: No Immigrants, no diversity of language)

From my opinion, immigration means that people who leave their native country and stay in a new country for the living. There are different voices about the increasing in the number of immigration in the New York City. As an immigrant, both my family and my brother’s move to Queens, New York City about 5 years already that we can feel the pressure as the new residences. Let me introduce a little bit of Queens. To me, it is big and beautiful because I love the environment here, which does not have much high building like Manhattan; people can see the nature of green throughout Queens and parks and any other public goods are open to everybody, but the most important fact makes Queens unique is the diversity, which gathers different types of people around the world. This is where I live, Queens!

Let’s talk about some judgments on Immigrants. Personally, I strongly agree the increasing of the number of immigration and legalize the illegal immigration after their certain years of hard work due to the fact that immigrants bring the diversity to the country and makes it more colorful and enjoyable. For example, if there is no Chinese immigrants move into the New York City, there will not be the shows such as lion dances or Chinese songs at downtown Manhattan or flushing and the ideas of color red alone with the happiness of Chinese new year will not be introduced to the world. Moreover, the immigration brings a lot more labors to the city in order to help the growth of the city not only from the development point of view but also from the revenue of taxes standpoints. Both factors prove the increase of immigration will benefit the city.

From the city’s point of view, we should increase the number of immigration because it will increase the country diversity and bring a lot more labors in order to increase the developing country. So, how about personal point of view. Everyone loves eating fresh food and taste different types of food. In some area of the world, unlike New York City, people only can enjoy their own style of food due to the lack of diversity. Luckily, we are living in New York city and thanks to immigration; we are able to taste different types of food around the worlds. such as Noodles from China and Chicken over rice from India. Living in New York city, I have the chances to purchase different types of food every day without repeating that save time and save money for traveling.

Someone may argue that Immigrants take away most of the jobs in the city. I agree with the point that increase of immigration will lead to some citizen unemployment. If we thinking from the micro point of view in the city. Most of the immigrants pick their jobs as low income with no English speaking required because English is too hard to learn for them in a short period of time. So, they do not have choices for better jobs. Clearly, the one who can speak English fluently get much benefit from their skills and have higher chances to find jobs that are more pay. There is the difference within the jobs searching between citizen and immigrants.

In conclude, I strongly agree with the increasing of immigration to the country, bring their culture, food, language and increasing labors only can help the development of the City.